After the Make Bridge-Building contest we are going to be holding the Ask Later talks. There’s been a lot of questions around the talks so I wanted to let people know how things will work.

Format: The Ask Later talks will *all* be 5 minutes long. They will all have 20 slides and each slide will be on the screen for 15 seconds. The presenter will not have control of their computer. That’s part of the fun. 🙂 We’re going to try to keep things tight, but we’ll allow a minute or two for questions after the talk.

Content: I consider these talks to be on the INFOtainment side of things. Informative, but due to the nature of the format they won’t be able to drive home deep topics. (but does anybody want that on a Thursday night at a bar?) Some of the known topics include: web projects, product demos, social computing research projects, home Asterisk hacks, Dorkbot, Make: projects, interesting uses of Amazon Webservices, and a new tech-art space in Seattle. I expect things to be geeky and tech-oriented, but I don’t think that people should shy away from other fare.

Current Speakers: Currently, there are about 18 speakers signed up; add yourself to the comments. Sign-ups will be available the night of the event (and I expect some people will even make their talks up at the event). I will list the speakers in a future post.

Timing: The talks will begin soon after 8:00 (after everyone has had time to get a drink), but no later thn 8:30. They will happen in 45 minute blocks. We’ll have 7 (maybe 8) talks in the first block and then take a 20 minute break. We’ll then start the second bock with ~7 more talks and then take another break. That wil be followed by a third block. If there is interest we will continue — the beauty of the LowerLevel is that there are two rooms (both with WiFi). If you don’t like the talks the other room has tables, the bar and probably Werewolf.

A/V: We will have a CHAC-hired A/V guy for the night. All of the slides will run from my machine (mac) which has Powerpoint. You can include audio, video, whatever on your slides. The slides will be advanced via the “Set Timings Feature”. I am going to try to have Keynote and PowerPoint 2003 for Windows (I just installed Parallels this week) available as well.

Logistics: I’ll need all slides before the session starts. Please entitle it with your name and include all necessary files. You can email them to me or we will use a thumbdrive for transfer during a break.

If there are ay questions, leave them in the comments or contact me. This (and actually all of Ignite) is experimental and not set in stone. It’s a new format. It’s meant to be fun and informative. We’ll adapt it to our purposes and if something isn’t working it will be changed.

11 thoughts on “Speaker Notes: Read This If You Want To Speak” 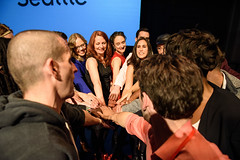 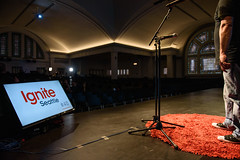 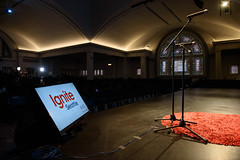 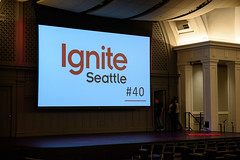 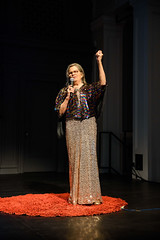